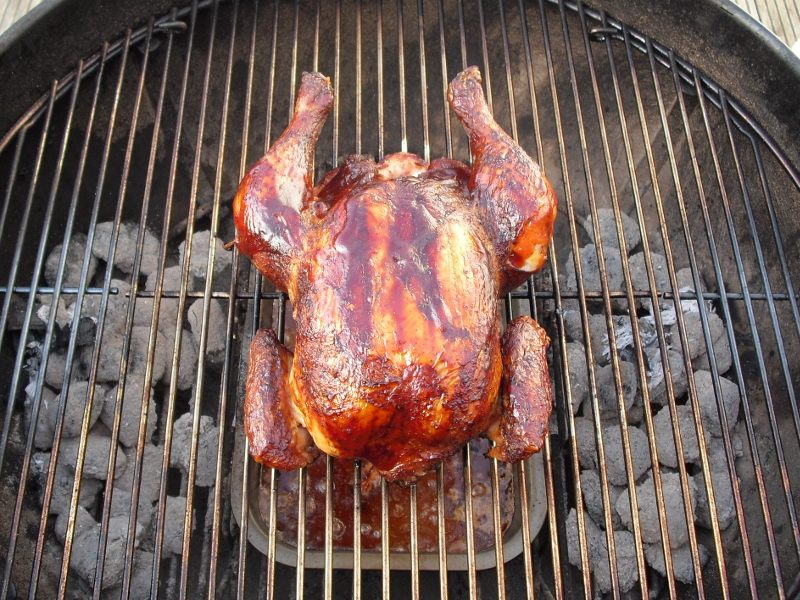 This is the recipe that I use to cook a whole chicken on the barbecue. I use a Weber One-Touch Premium which is a kettle barbecue, but it should work with any barbecue with a lid.

Most of these ingredients are optional. The chicken obviously isn't!

For the spice rub you can use anything, but you probably want it to have some salt in it.

Take the chicken out of the fridge and let it come to room temperature. Soak a couple of handfuls of wood chips in cold water for about 30 minutes before starting cooking.

Set the barbecue up for indirect cooking. I cook with charcoal, and normally use a chimney starter to light it. My barbecue has 2 rails that you can use to divide up the bottom of the barbecue, so I split it into 3 sections, with coal on either side and a small baking tray in the middle to catch the drips from the meat (see the photo at the top of the page). You can use a disposable tray if you don't want to ruin your baking trays.

I've never cooked this on a gas barbecue, but I believe you can achieve the same effect by lighting the burners on the outside, and leaving a space in the middle of the barbecue that is unlit.

While the barbecue is heating up, prepare the chicken. Rinse the chicken inside and out, then place half of a lemon and a bunch of herbs inside the cavity. If you don't have a lemon you could use an onion. The idea is that the lemon / onion will release moisture and flavour while the chicken is cooking.

Rub a little olive oil around the outside of the chicken, and then rub some spice mix all over it.

Once the coals are all burning, pour some water into the drip tray. This will help keep the environment inside the barbecue nice and moist.

Place the chicken in the center of the barbecue, over the drip tray, breast side down. Put half of the wood chips on the coals on either side and place the lid on with the vents open.

Leave the chicken in the barbecue for about 45 minutes before you even think about messing with it! Keep an eye on the temperature, and try to keep it around 180°C. If the temperature gets too hot, close the vents, and keep adjusting them to maintain roughly the right temperature. Chickens cook relatively quickly so it doesn't matter if it gets a bit hotter than this.

The chicken will probably need around 1.5 to 2 hours to cook. I normally read the instructions on the chicken to figure out how long it's going to need, adding a bit of extra time for good measure. About half way through cooking you'll want to turn the chicken over.

20 minutes before the end of cooking, open the lid and turn the chicken back over (you turned it once already, right?). Brush it with barbecue sauce and put the lid back on. Cook for another 10 minutes, then turn it over one final time and brush more sauce on it, and leave it for the last 10 minutes.

Once the chicken is cooked, take it out of the barbecue and put it on a plate with some foil over it to rest. You want to leave it for at least 10 minutes, but I normally leave it a little longer so that I have time to cook some veggies on the barbecue.

If you don't have herbs or a lemon to stuff the chicken with don't worry about it, I'm sure it will be fine without. The same goes for the wood chips: they add a nice smokey flavour but are not compulsory.