Originally I had 2 rats but one of them died about a year ago of a respiratory disease. Her breathing got really bad, and one day I came home and she was literally trying to bite through the cage door so I put her on my lap and sat with her. I tried putting her back in her cage but she was having none of it, so I sat with her for the rest of the night and cancelled seeing my friends so I could stay with her.

Her breathing got slower and slower, and she panicked a few times and thrashed around, and eventually died in my hands.

Since my first rat died, I found it much easier to take the remaining rat out of the cage as it is much easier to handle a single rat on her own. Most days I took ratty out and sat her on my lap while I used the computer, and she would either sit on my lap or on the chair, or hide under my t-shirt, or sometimes sit on my shoulder whilst I walked round the house.

In July I went on holiday for a few weeks, so I took ratty to my mum's house to be looked after while I was away (thanks Mum!), and when I got back she had developed a tumour on her side. Mum said she had enjoyed having ratty with her, and that they had bonded, and that if she put ratty on the floor ratty would always come straight back to her. She put ratty on the floor to show me and ratty came running straight back to me instead!

Before my holiday, I didn't really know if ratty was particularly keen on me, or if she just liked people in general, but this proved to me that she did recognise me and have some kind of attachment to me.

When ratty was out of the cage she liked to sit on our laps and then would go off exploring, and this was the first time that I realised that her back legs weren't working so well. When she was younger she would run around frantically and climb on everything, but now she waddled along like an old lady (which she was as she was over 2 years old which is very old for a rat).

Over the next month her tumour got bigger and bigger. Another tumour appeared underneath her chest, and she became less and less energetic. She stopped eating a lot of the different things in her food mix and just picked out the best bits instead. When I picked her up from my mum's house she was slightly over weight, and I had always made sure that she ate all of the different things in her food so she didn't become unhealthy, but at this point I decided to just let her eat what she wanted as she was clearly nearing the end of her life. Over the course of a month she went from being a slightly fat rat to a slightly skinny rat with two enormous tumours on her chest and side.

Although she was not as lively and energetic as before, she still spent a lot of time out of her cage, but It was different now because she was really easy to handle. Most days she would just sit in my lap or under my t-shirt and would often be out of her cage for hours each evening. Every time I walked past her cage she would come to the door and obviously wanted to be out, and when I gave her a treat she would stash it somewhere in her cage and then come back in the hope I would let her out.

Almost exactly a month ago, I came home from work and ratty was not looking good at all (I wrote about it on day 6 of my everyman experiment). This time she was biting at the door, wanting to come out and refusing to go back in, just like when my first rat was ill.

I took her out of the cage and she had very laboured breathing, and quite a few times she panicked and started thrashing around just like the first rat did. I really didn't want to just put her back in the cage to die, so in the end I stayed up late with her, and then slept on the sofa with her. I laid there with her on my chest for a couple of hours drifting in and out of sleep, and she just laid there very still at first, but as the night went on she started to get restless and move around until I eventually woke up at 2:00am. By this point she seemed pretty much normal.

I was really surprised that she had recovered from this! I was so sure that she was going to die on that night, and I was starting to think about putting her out of her misery as she seemed very distressed, but somehow she got over it and was pretty much back to normal.

During the weeks after that she got weaker and weaker, but we still had a lot of time out of the cage together. She loved to sit on my lap and would often grind her teeth and boggle her eyes in and out (seriously) like rats do when they are content. She got thinner and thinner, and I often didn't even need to fill up her feeder as she would barely touch her food, but she still enjoyed her treats so I wasn't too worried.

Three days ago my ratty took another turn for the worse. She was just lying there inside her little green plastic house, looking really sad. I opened up her cage and she managed to pull herself out with her arms and I scooped her up and took her upstairs. 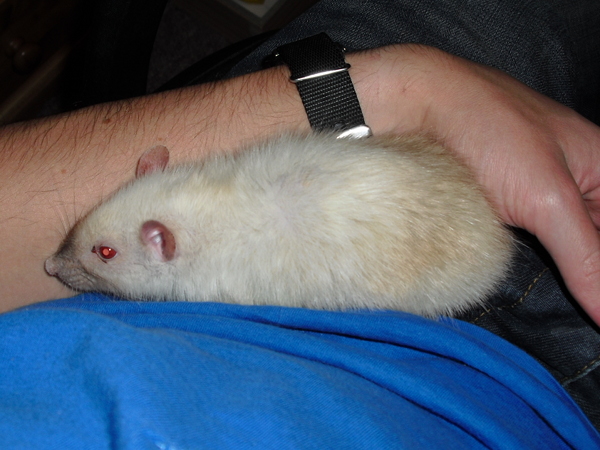 When it started to get late, I tried to put her back in her cage so that she could eat and go to the toilet, but she only managed to take a few sips of water and then dragged herself back towards the cage door. I decided I wasn't going to force her to spend her last night in the cage if she didn't want to, and let her sleep with me on the sofa like I did the previous month when she was sick. I didn't realise at the time that she would have so long left in this state.

She never ate anything again after that, and was so skinny that I could feel her spine and ribs when I touched her. The next morning she drank a little water but couldn't even hold herself up to use the drinker.

I worked from home for 2 days to care for her, and didn't put her back in her cage at all. Wherever I went she went, apart from a couple of times when Yu Lee watched her for a few minutes so that I could shower and go to the toilet.

At first she just seemed sleepy, and then she couldn't hold her head straight and started laying on her side. The next evening she seemed to get confused and would randomly drag herself off of me and I had to grab her at the last minute to stop her from falling onto the floor. When I was sleeping one night I must have put my finger in front of her face and she bit me, which was the only time she has ever done that (well once she bit me when I had gravy on my finger but I don't think that counts as I must have tasted like food!).

Yesterday she started having convulsions every few hours, where all of the muscles in her body would tense and she seemed to be really uncomfortable. By this point she hadn't had anything to drink for 36 hours, which is a long time for such a small creature, so maybe this was a side effect of the dehydration.

Eventually in the evening I put a saucer of water in front of her and managed to convince her to drink some of it, but I had to literally hold her over it as she couldn't even support her own weight.

Later on in the evening she started to crawl off randomly again, as if she was looking for something. I tried putting her in her cage; in her litter tray; on the floor. I tried everything I could think of. In the end Yu Lee said "I think she just wants a cuddle" so I put her on my lap and put my hand on her and she instantly settled so I guess she was right.

I slept on the floor with her in the study, and she wandered off a few times in the night. At one point I had to get up and look for her and found her sleeping underneath my computer desk.

This morning she was really weak, and was drifting in and out of consciousness. Her eyes had been getting worse each day, with the areas around them being stained red from her tears (rat tears stain everything red) which is really common when rats are sick / stressed. The convulsions were getting longer and she would spend 5 to 10 minutes at a time twitching and grinding her teeth. I realised that it could take days for nature to run its course, so I called the vet and booked an appointment for 11:00 am to have her put to sleep.

At 10:00 am I put some banana and strawberry smoothy mixed with some water on a saucer, and held her over it for about 10 minutes while she drank it. It was very slow as she could barely move her tongue, and she had to kind of dip her face in the water to drink it. She seemed to enjoy it though and kept going until the whole lot was gone. 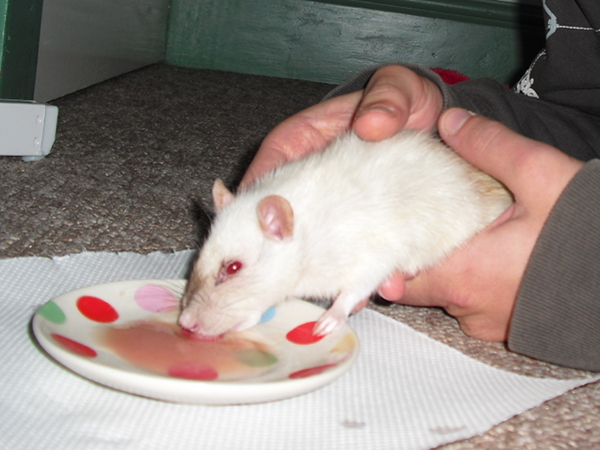 After that I did my best to wipe the smoothy off of her face and sat with her for a while until it was time to go. 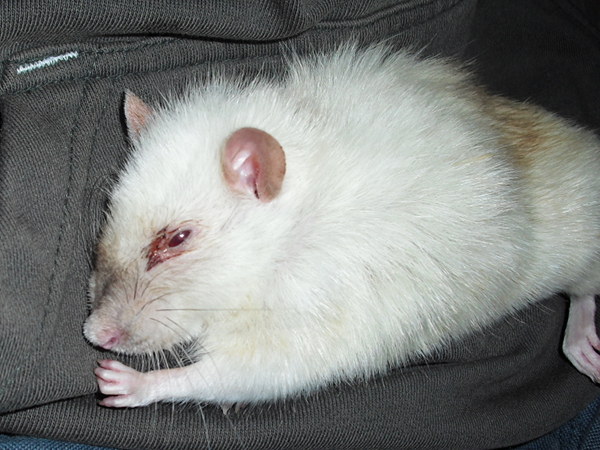 Ratty just before we left for the vets

I wrapped her in a blanket and took her to the vets, and they gave her some anesthetic gas and then a lethal injection. I asked the vet to bring her back out afterwards so I could see that she was dead.

These past few days have been really difficult for me. I have spent every minute with her trying to make her as comfortable as possible, and I never would have thought I could get so attached to an animal.

I am going to miss having her on my lap in the evenings, and dipping my finger into my drink and letting her lick it off of my finger (she especially liked a drop of beer!). I will miss giving her chicken bones and bits of food that fell on the floor and wandering around the house with her perched on my shoulder. Most of all I think I will just miss having a little friend that wanted nothing more than to come out of her cage and snuggle up under my t-shirt.

A lot of people think rats are disgusting, filthy creatures, but I think they make the most amazing pets and I would definitely like to get some more in the future, but for now I am going to enjoy having no pets in the house, and being able to go away on holiday without having to think "who's going to feed ratty?".