This page details my requirements for assets in JumpGame (work in progress title!). All of the backgrounds show on this page are using the final images, but all of the objects are just prototype images, and are not how I want the finished sprites to look.

At the moment I am using a small mario sprite in my prototype and this is the perfect size! I'd like the character sprite to be 16x16 pixels.

I need some help designing my main character. I would like him to have the following properties: He is a male human. He is not much of a hero and has no weapons. He is quite short (as he needs to fit inside 16x16 pixels). He is not from any particular time period: I would like it to be ambiguous whether he is from the present or the past. He is just a regular guy.

I am open to any suggestions about what he should look like!

The jumping animation can just be a single frame - it's up to you whether you think he needs a separate animation for jumping and falling (i.e. whether he is moving upwards or downwards in the air)

This is a golden magical treasure that the player collects from the top of the tower. It would be cool to get a couple of different treasure sprites. The current one is a chalice (like a golden wine glass).

This is the first and easiest environment.

A bat that flies left and right over the playing field.

This environment has light blue walls and a red / pink background, and is filled with tiny mushrooms on the platforms and ghosts that appear out of nowhere and follow the player. 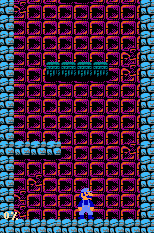 This is a very small sprite of an animated mushroom that walks slowly left and right along a platform.

I would like this sprite to be no bigger than 16x32 pixels.

This is character is a ghost / shade. Initially, the play can just see his eyes...

...but when the player approaches the rest of his body fades in and then he starts to follow the character around.

In my initial prototype he started off as red eyes and when the player approached I used transparency to fade him in. Now, because I want the assets to have an 8 bit look fading in with transparency is not an option so we need some kind of animation instead.

This environment has white walls and a black background 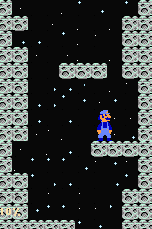 This is an eyeball that faces the camera and floats slowly up and down.

This is a claw viewed from the side, that flies across the map when the player is close by, then slowly moves back to its starting position.

The sprite should be no bigger than 16x16 and the hatbox needs to be slightly smaller than that. Currently this is a red spiky ball that moves left and right across the screen at high speed. You don't have to use the same colours as me for this!

This is the last environment and is the most difficult. 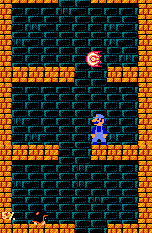 This one can actually be pretty much anything! In my initial prototype it was a spiky thing that rotated as it moved across the screen. It was a mechanical trap rather than a creature.

This is a relatively large object (16x16) that moves slowly left and right across the map. If you can think of a better idea for an enemy that does this I'm open to suggestions.

This is a beetle that moves relatively quickly along each platform.

This is a small skull seen from the side, with animated flames around it. It chases the player when he is close by.